Trekking in Nepal in September: Weather Conditions, Festivals and Guide

Nepal is a country full of endless trekking destinations. Eight of the top ten highest mountain peaks in the world wait for you to tread on their footsteps, and relish their beauty.

With the Monsoon season ending from the second week of September, the Autumn season begins from the following weeks of this month. Since Autumn is the best month to trek in Nepal, traveling here in September is an excellent choice.

The Autumn season is also the best season to witness the rich biodiversity of the trekking trails in Nepal. You may catch glimpses of rare wildlife like Snow Leopard, Red Panda, Himalayan Musk Deer, and other exotic animals.

And that’s not all.

Notable festivals like Dashain, Indra Jatra, and Teej also fall in September. Indulging with the Nepalese locals and their cultures during the festive seasons adds in even more fun and joy to your already adventurous trekking experience.

Weather Conditions in Nepal in September 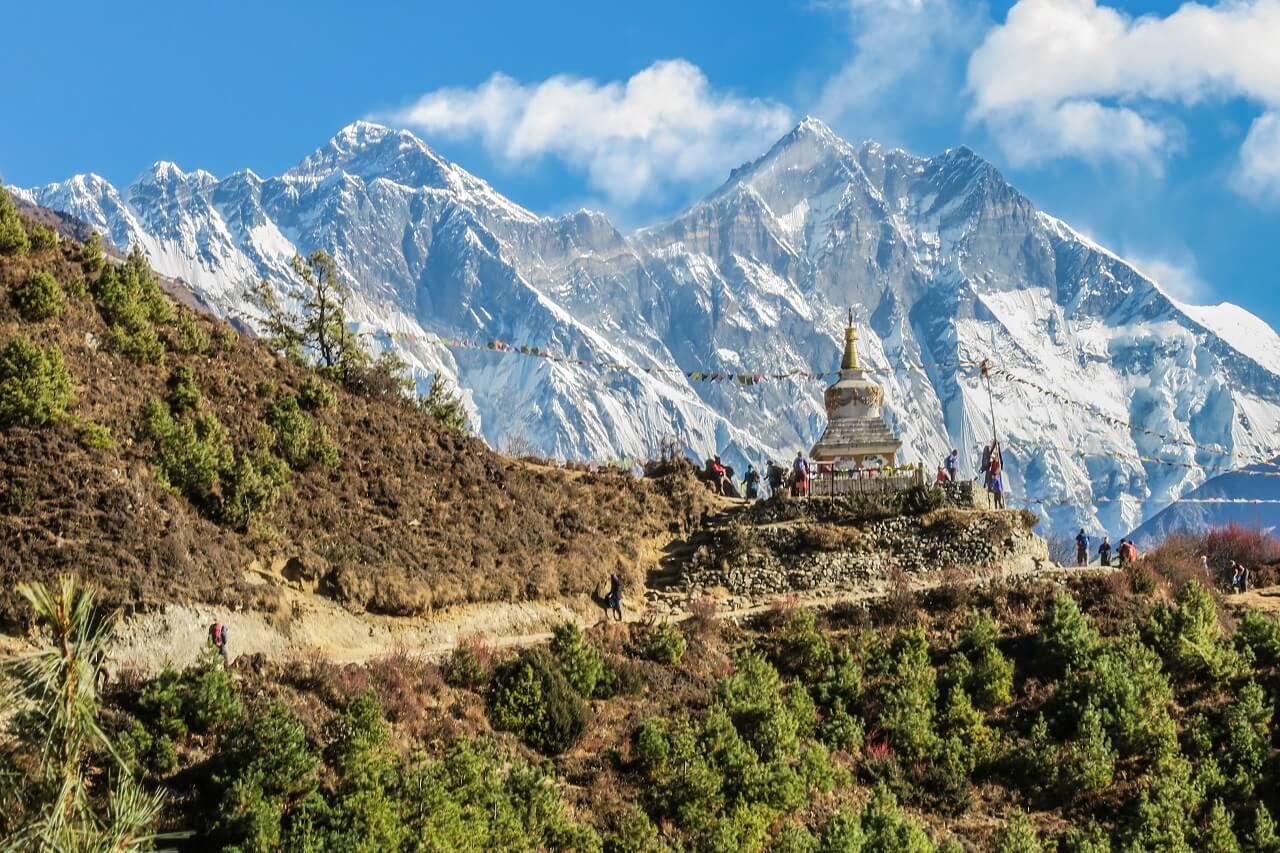 September is an Autumn month in Nepal. With the Summer ending and fading Monsoon rains, this is one of the best months to trek in Nepal when the temperature starts falling to more cooling situations.

The first week of September might receive a few rain showers, but it won’t persist for long with the end of Monsoon in mid-September.

Here’s a table for Temperatures and Precipitation details for major cities in Nepal in September.

Festivals in Nepal in September 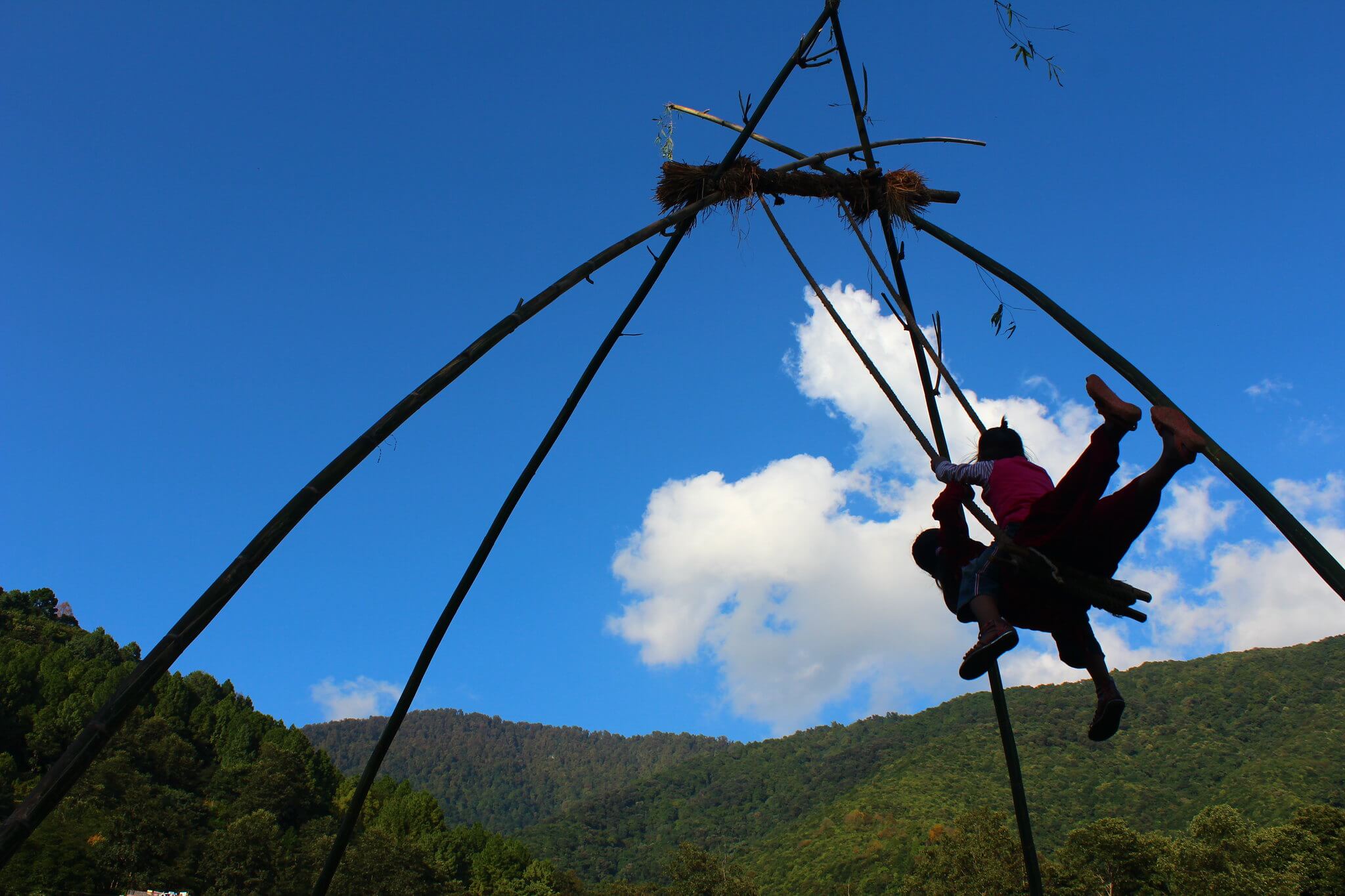 Dashain is one of the most important festivals of Nepal. Celebrated for 15 days by Hindus, this is the longest festival in the calendar of Nepal.

Dashain usually falls in September or October. On this auspicious festival, Nepalese people return to their homes or families from wherever they are to celebrate it. On your trek to Nepal in September, you will thoroughly enjoy this joyous festival no matter where you are in Nepal.

The 15 days of Dashain symbolize the battle between different manifestations of Goddess Durga and Devil Mahishasura and the 10th day signifies the triumph of Durga over evilness. It is the main day of the festival and goes by the name Vijaya Dashami (Victorious 10th Day).

On Dashain, you can view and indulge in several tantric rites and rituals of different religious significances. You will also witness the offerings and sacrifices of domestic animals to gods and goddesses. 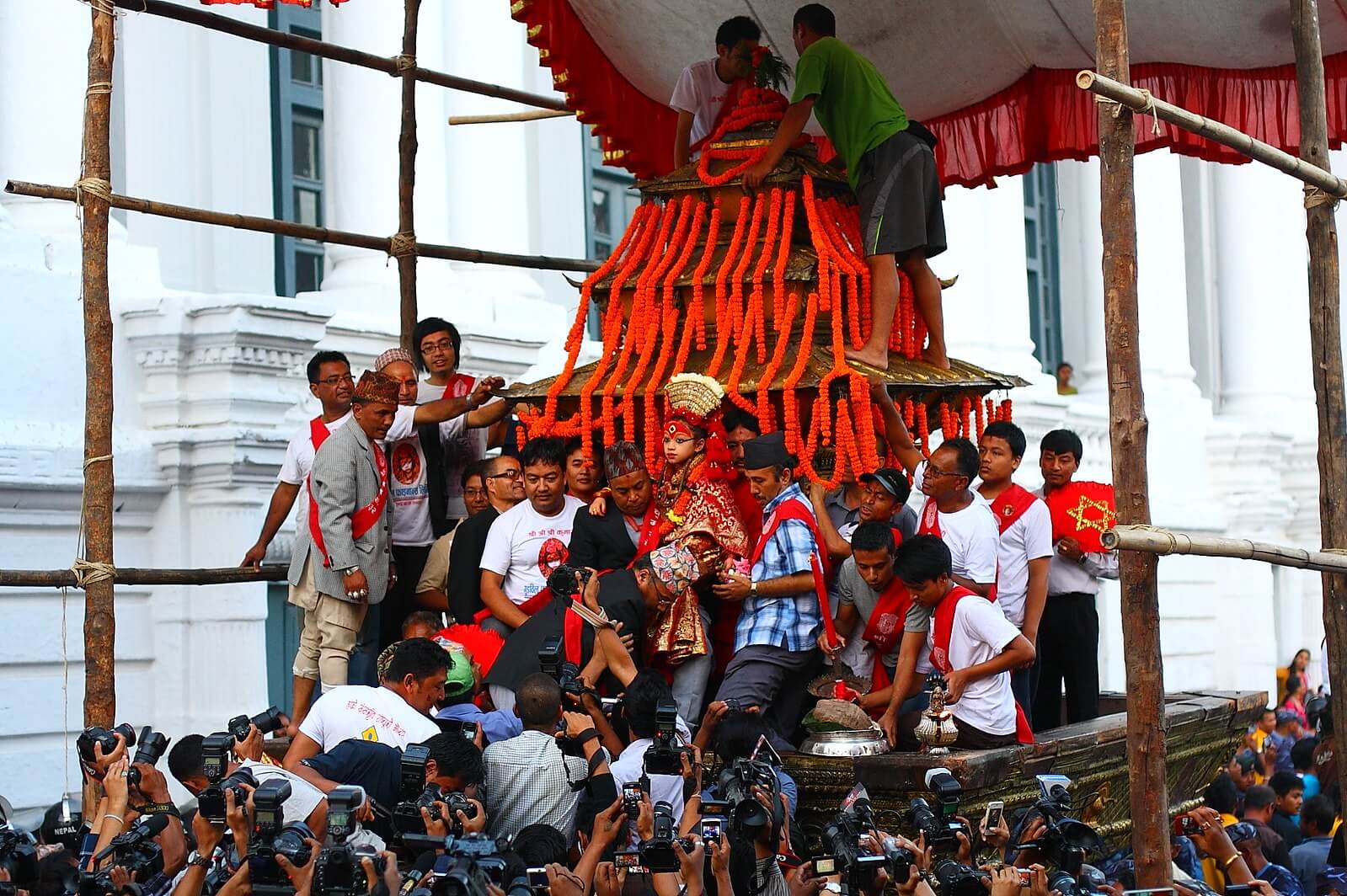 Indra Jatra is the biggest street festival of Kathmandu Valley. This festival falls in September, and the Kathmandu dwellers celebrate it for eight days.

Kathmandu locals call this festival ‘Yenya’ as termed in Nepal Bhasa. This festival begins erecting a wooden pole that signifies Linga (Phallus) and the rare display of the deity Akash Bhairab (God Indra).

The chariot processions of Ganesh, Kumar, and Kumari are pulled, covering the streets and spreading the festive energy.

When you are in Kathmandu in September, you can get a chance to partake in this festival with the locals of Kathmandu city. The view of the streets in Kathmandu covered with chariot processions, and masked dances will fill the viewer’s heart with feelings of enjoyment and delight. 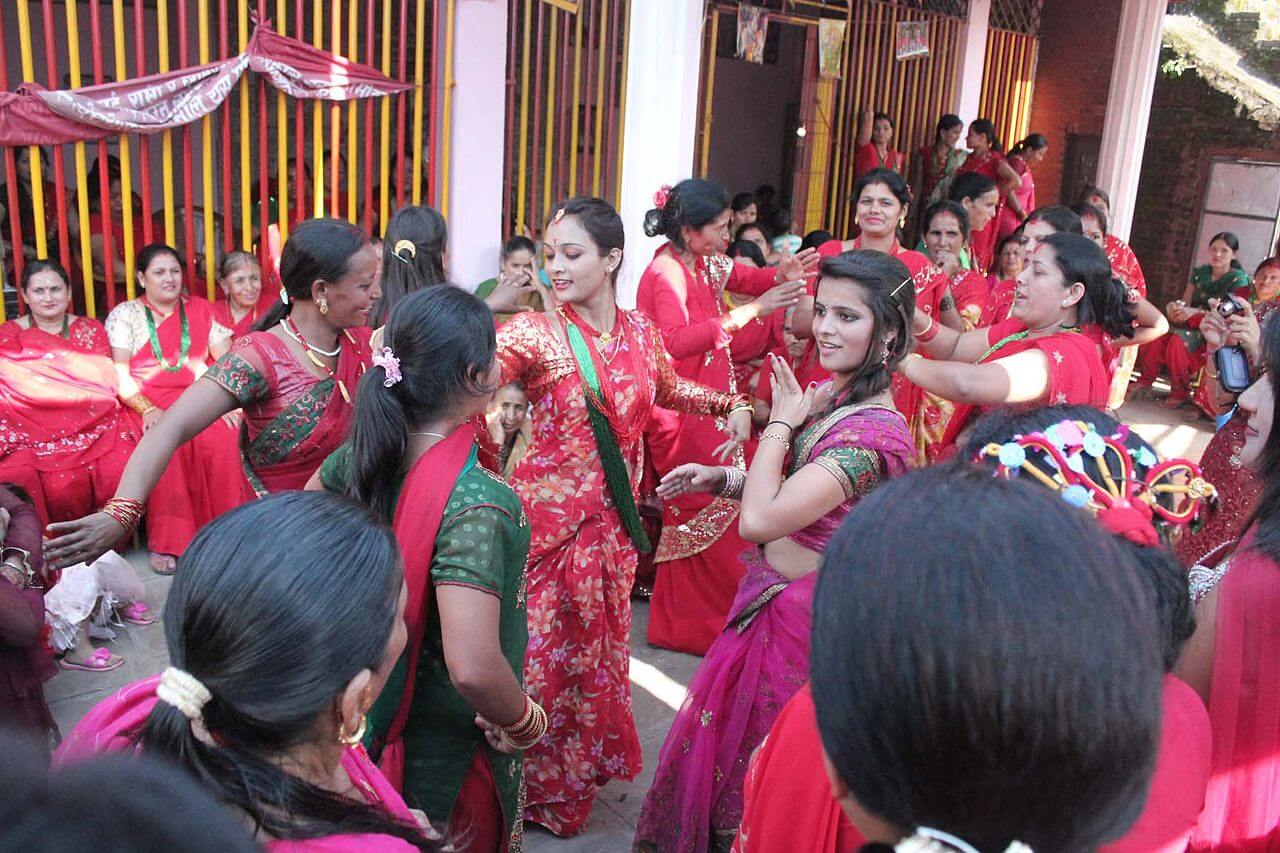 On the day of Teej, women across Nepal dress up in beautiful red saree, wear colorful bangles on their wrists, and they sing and dance on Nepali Teej folk songs.

Best Routes for Trekking in Nepal in September 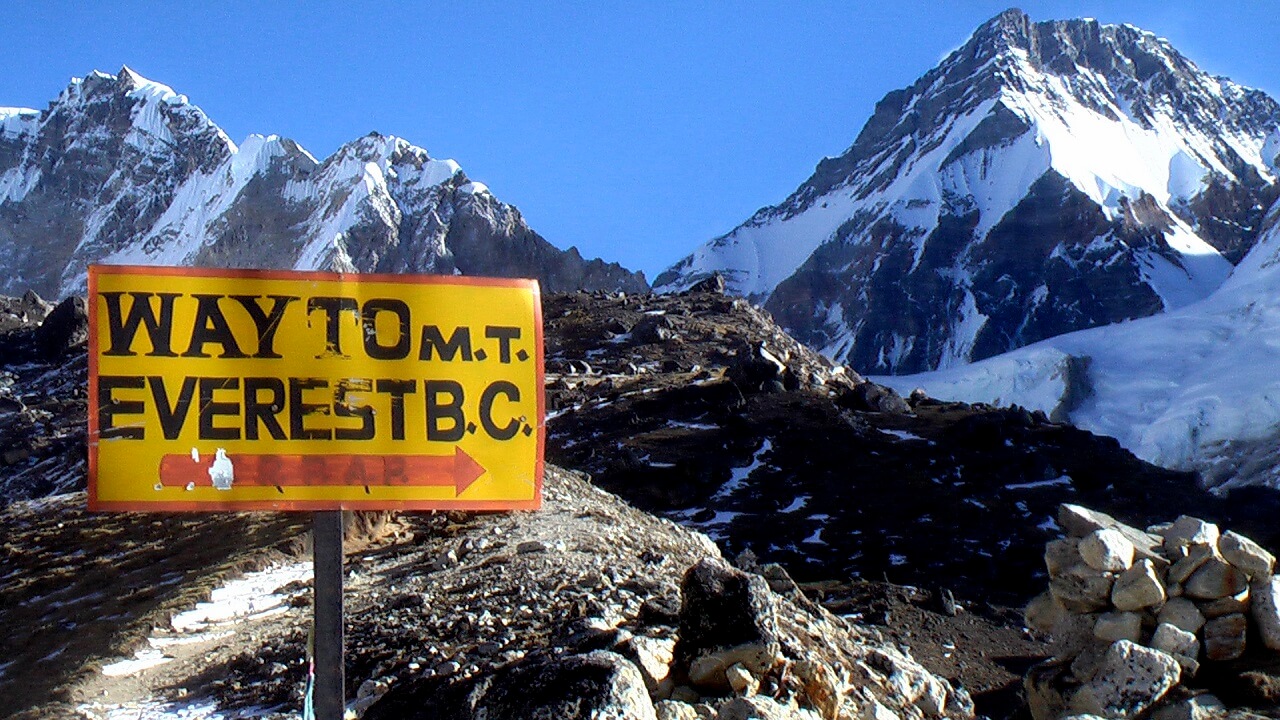 Mt Everest is the tallest mountain in the world and is the defining glory of Nepal. So the trek to the Base Camp of this wondrous mountain deserves to sit on top of this list.

This trek takes you to a maximum elevation of 5,643m at Kala Patthar. From Kala Patthar, clear skies in September offers the best views of Mt Everest along with other high mountain peaks like Lhotse, Cho-Oyu, and Nuptse.

September offers the perfect climatic conditions to witness the diverse flora and fauna of the Sagarmatha National Park. With lush green vegetation enlivened by the Monsoon season ending from the starting weeks of September, the incredible scenery will enhance the beauty of Nepal.

Here’s a table with Temperature and Rainfall details for locations en-route the Everest Base Camp Trek. 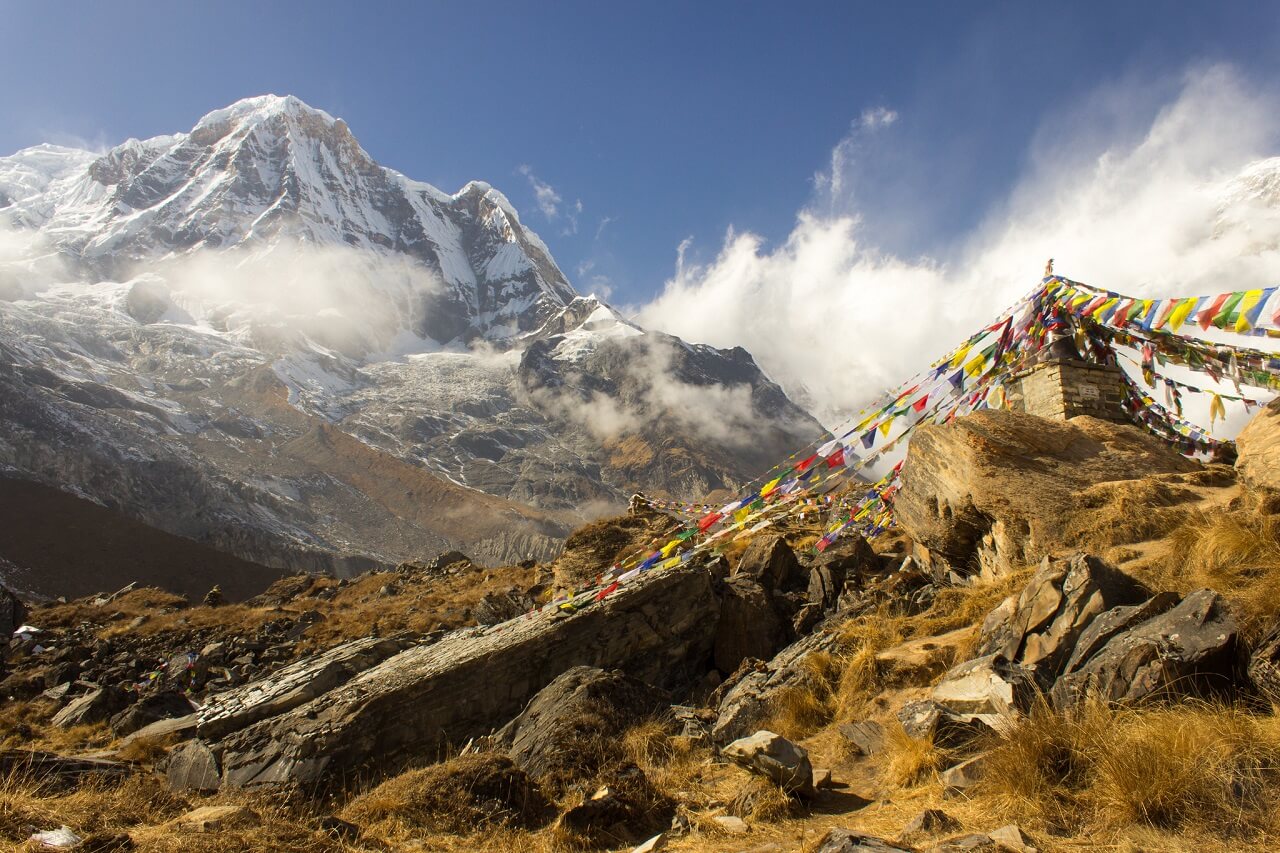 The Annapurna Base Camp Trek is one of the world’s best trekking trails. This fantastic trekking adventure to the laps of the Annapurna Himalayas is an appropriate choice for September.

This trek takes you to a maximum elevation of 4,130 meters. Especially in September followed by the ending weeks of the rainy season, the skies will be transparent with low chances of rain.

In the blue skies and high visibility of September, you will witness the best snow-capped views of Annapurna I, II, III, and IV along with other high mountain peaks like Dhaulagiri, Nilgiri, and Lamjung.

The popularity of this trek adds the benefits of numerous accommodation choices along the routes. The early September doesn’t see much of a crowd in this trek route, and therefore you can enjoy quieter trails.

Here’s a table with Temperature and Rainfall details for locations en-route the Annapurna Base Camp Trek. 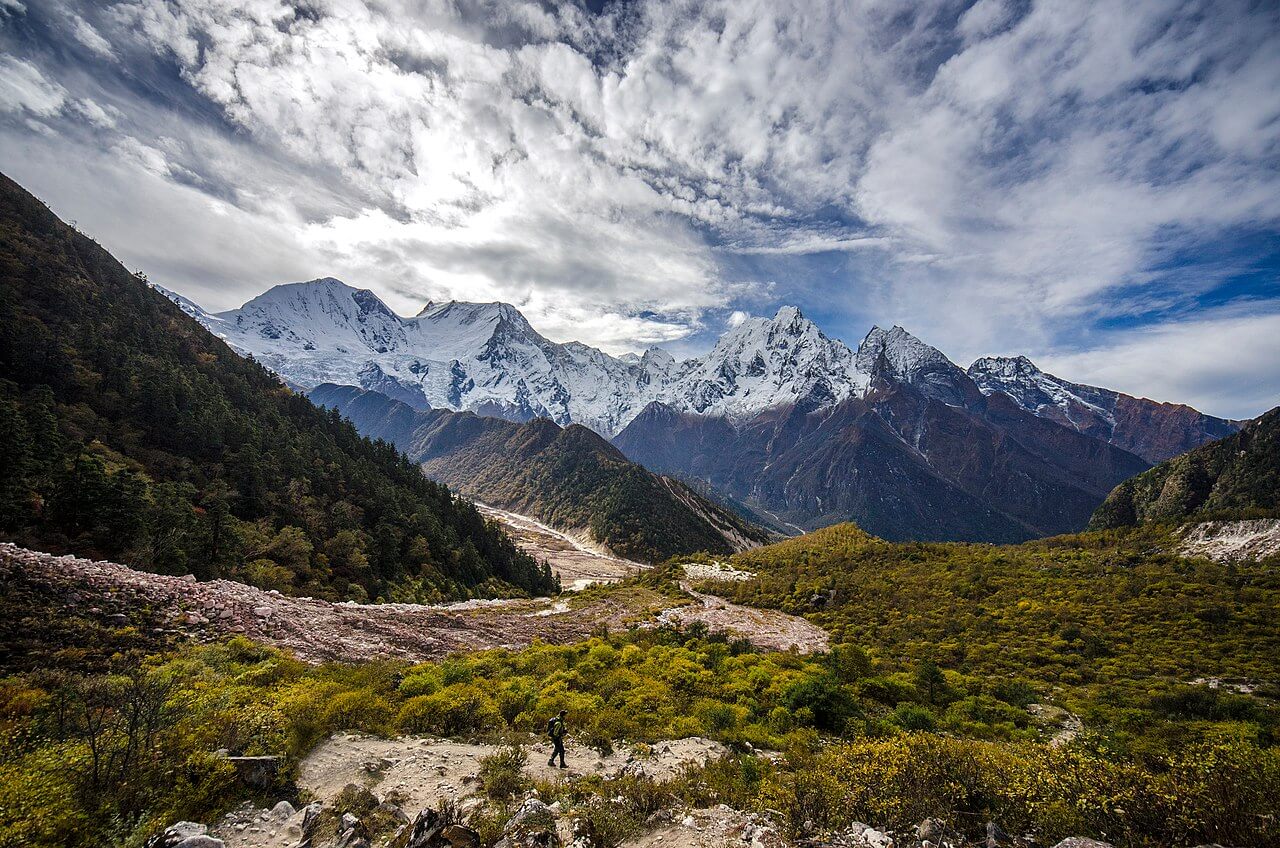 The Manaslu Circuit Trek is a pristine circular trek around the eighth tallest mountain, Mt Manaslu, in the world. The name Manaslu translates into English as the mountain of the spirit.

At a maximum elevation of 5,167 meters, Larkya La Pass is the highest point in this trek. The viewpoint of Larkya La Pass provides you astonishing views of Manaslu, Himchuli, Ganesh, Ngadi Chuli, and other high mountain peaks.

This trek takes you through off-beaten and secluded routes which are empty even in the peak trekking seasons. So your Manaslu Circuit Trek in September will be quiet and peaceful.

September is also a great time to witness the biodiversity of the mountainous regions along the trek.

Here’s a table with Temperature and Rainfall details for locations en-route the Manaslu Circuit Trek. 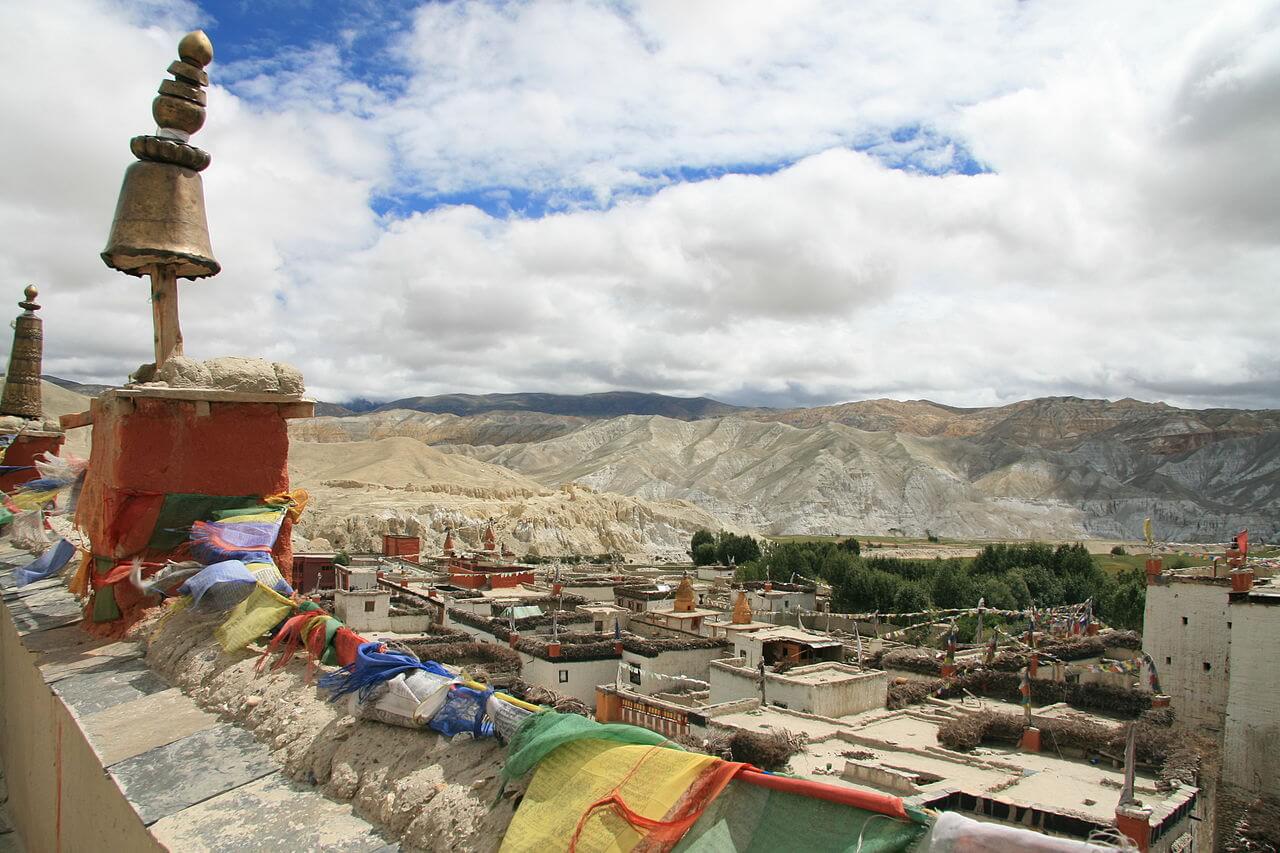 The Upper Mustang Trek is one of the most adventurous treks for September. This trek takes you to the Rain Shadow Areas behind the Annapurna Mountain ranges.

To an elevation of 3,840 meters, Lo Manthang is the highest point in the trek. Lo Manthang is the capital of the former kingdom of Mustang ( Also called the Forbidden Kingdom of Lo). Here you will witness quaint cultures and lifestyles, highly influenced by the Tibetan culture.

En route to Upper Mustang, you will also observe Kali Gandaki, the deepest gorge in the world. The route combined with the number of suspension bridges that you will be crossing through will amaze you.

Here’s a table with Temperature and Rainfall details for locations en-route the Upper Mustang Trek. 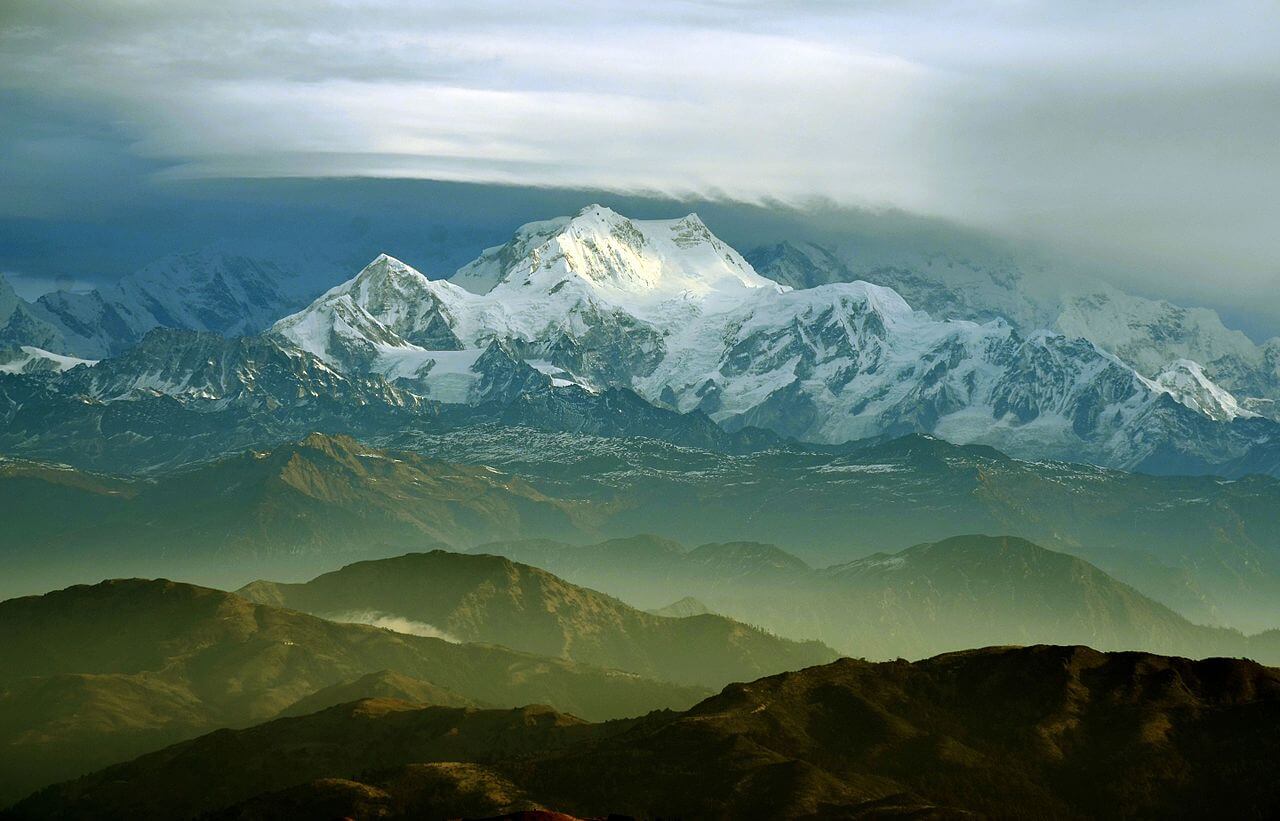 The Kanchenjunga Circuit Trek takes you to the footsteps of the world’s third-highest mountain Kanchenjunga.

The trek takes you to a maximum elevation of 5,160 meters at Pangpema Base Camp. From this point, you can frame the best views of the North Face of Mt Kanchenjunga.

In this trek, you will walk through tranquil and untouched trails. This off-beaten trekking trail doesn’t see crowds even in the peak seasons. So your trek encircling the Kanchenjunga mountain will be quiet and peaceful.

En route the Kanchenjunga Circuit Trek, you will also enjoy the unique cultures and lifestyles of Rai and Limbu communities.

Here’s a table with Temperature and Rainfall details for locations en-route the Kanchenjunga Circuit Trek.

Tips While Trekking in Nepal in September 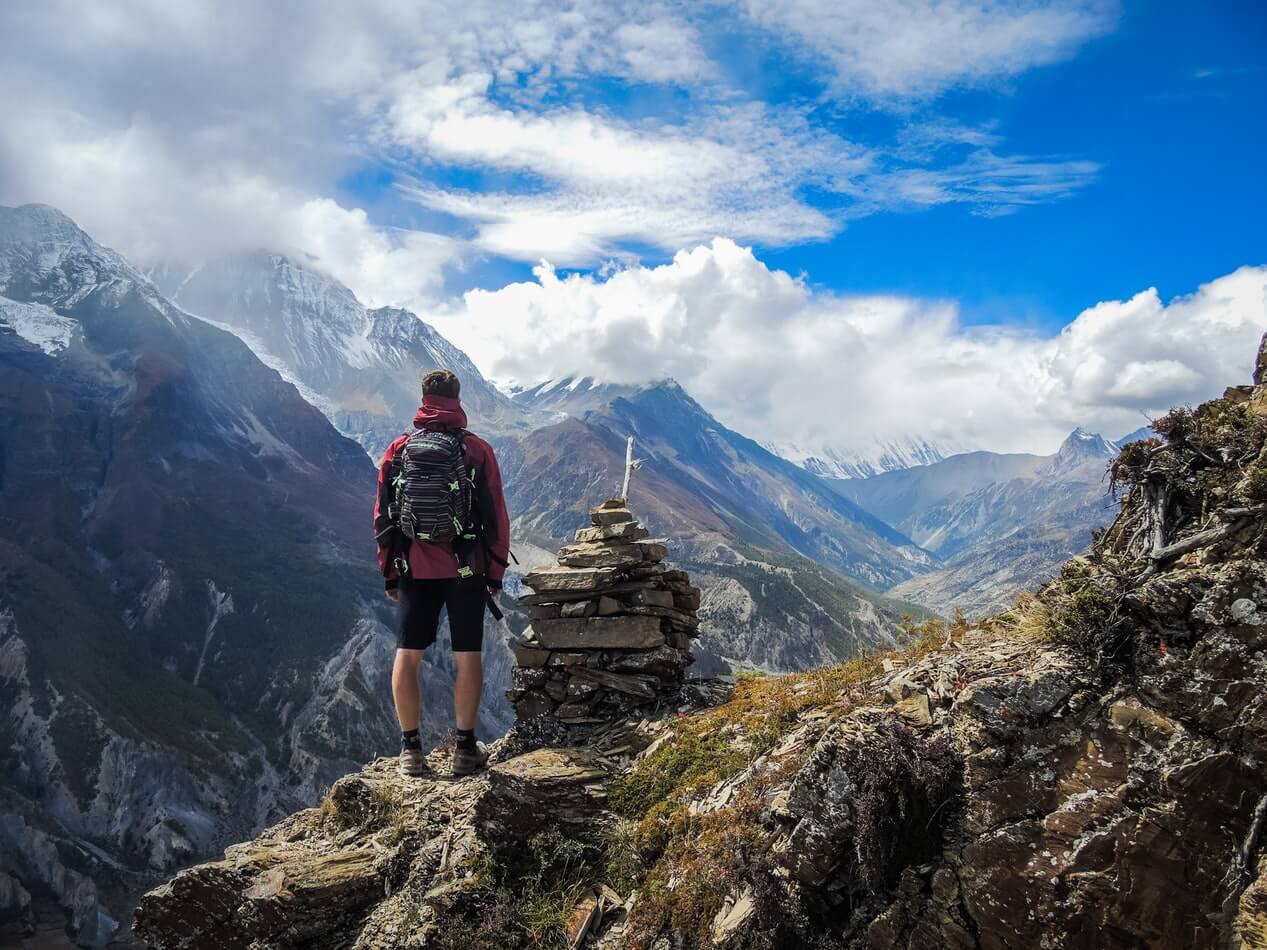 Here are a few tips to make your trekking experience even more fun and enjoyable.

September falls in Autumn in Nepal. The first two weeks may witness a few rain showers in the lower regions. However, the last two weeks of September will not see much rain. The trekking routes might turn dry, and the skies become clear by ever so alluring views of snow-capped mountain peaks.

The trails won’t see much of a crowd in this month, and you will enjoy a variety of accommodation choices. The off-beaten and secluded trekking routes like Nar Phu Valley Trek and Manaslu Circuit Trek will give you the adventures of a lifetime.

Q1. What is the weather like in Nepal in September?

September is the start of Autumn in Nepal. The first week of September might receive rainfalls but the following weeks will get dry with clear skies.

Q2. What festivals fall in September?

Dashain is the longest and most important festival in Nepal, celebrated for 15 days. This festival symbolizes the victory of Goddess Durga over Devil Mahishasura.

Indra Jatra is the biggest street festival in Nepal celebrated only in Kathmandu Valley. This festival fills the streets of Kathmandu city with chariot processions and masked dances.

Teej is another significant festival celebrated by Hindu women all over Nepal. On this day, women wear red sarees and colorful bangles, and sing and dance with Teej folk songs.

These festivals will add joy and fun while trekking in Nepal in September. 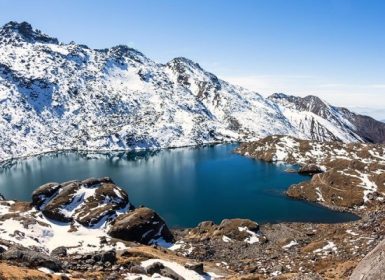 Trekking in Nepal is possible in every season because it offers a unique landscape, geography, and climate. August falls in the middle of the monsoon season in Nepal and it gets hot, wet and humid almost in every part of the country. Sometimes trekkers can miss the mountain views as it may be covered in … 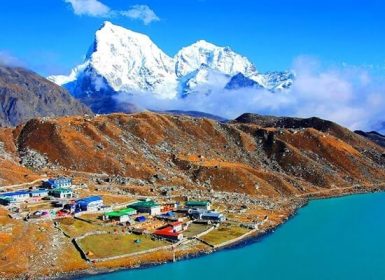 It is in the nature of the human mind to make rational decisions. You want the best out of anything you invest in. Likewise, while traveling, you want to get the best out of the time and money you invest. Named as the best value destination of 2017 by Lonely Planet, Nepal, for you, is … 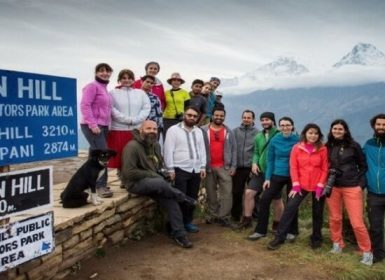 Nothing can be further away from the truth that Nepal is one of the best places for outdoor adventurous activities. All credits to the beautiful Himalayas and the diverse geographical features, Nepal is considered a paradise for adventure seekers. Besides adventure traveling, Nepal is also a prime destination for luxury holidays. For the visitors’ best …