Trekking in Nepal in January: Weather, Festivals and Destinations

Nov 7, 2019Sep 2, 2019Basu PandayLeave a Comment on Trekking in Nepal in January: Weather, Festivals and Destinations 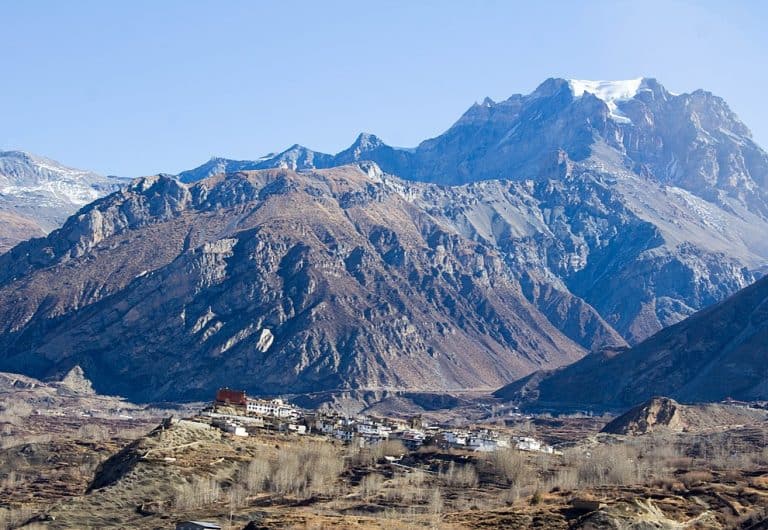 Trekking in Nepal is a popular choice for many experienced trekkers. Nepal’s diverse topography not only offers you high altitude experiences but also low altitude forest trails.

Since January is the coldest month in Nepal, it’s better to avoid high altitudes and enjoy lower treks, which are as adventurous if not better.

While being in Nepal in January, you can explore the 7 UNESCO Heritage Sites in and around Kathmandu, the Capital City of Nepal.

The beautiful villages along the trekking routes, the friendly dwellers, and their unique cultures and lifestyles are subjects to ponder and indulge in during your trek in Nepal in January.

Weather Conditions in Nepal in January 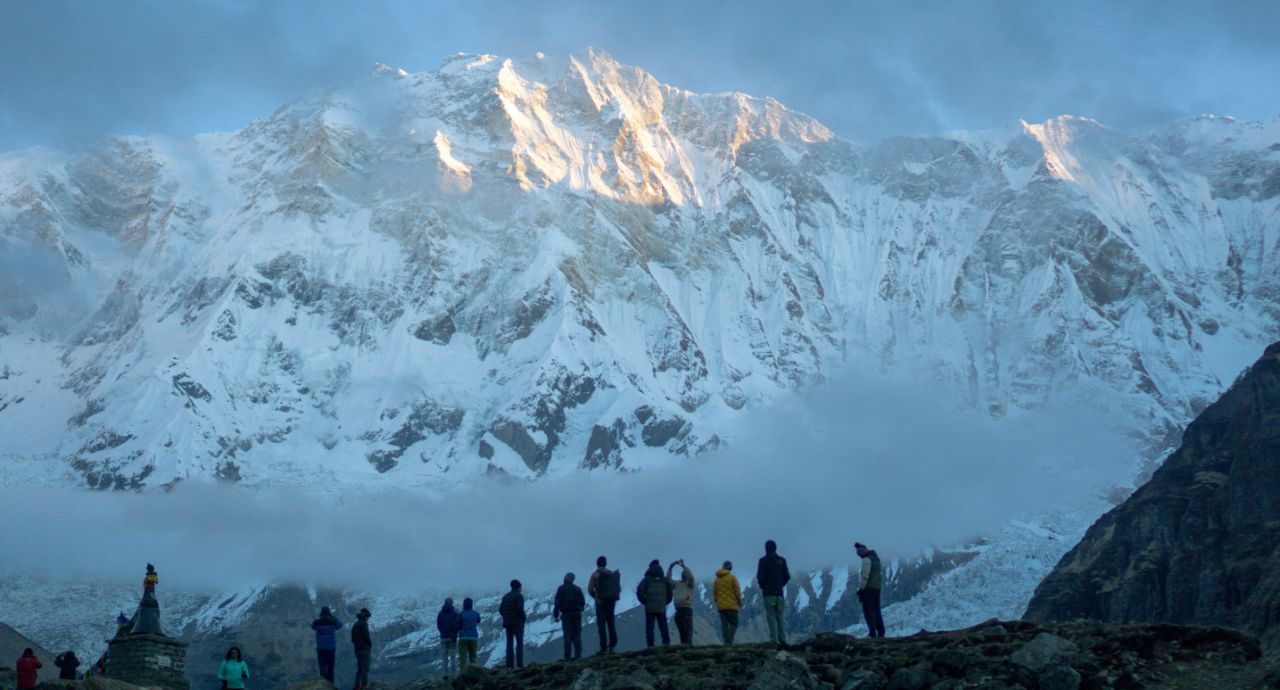 Six seasons circulate in Nepal throughout the year. Among these, January falls in the mid-winter season, the coldest month of the year.

In January, temperatures range around 8 degrees Celsius by day and 1 degree Celsius at night.

The mercury falls with the rising altitudes that your treks take you. The nights get colder with low temperatures decreasing up to -10 degrees Celsius.

The winter skies remain mostly clear with almost no rainfall in the whole month. The clear skies offer opportunities to catch some of the most beautiful scenes of picturesque mountain peaks.

Here’s a table depicting the temperatures of different locations in Nepal during January.

Festivals in Nepal in January 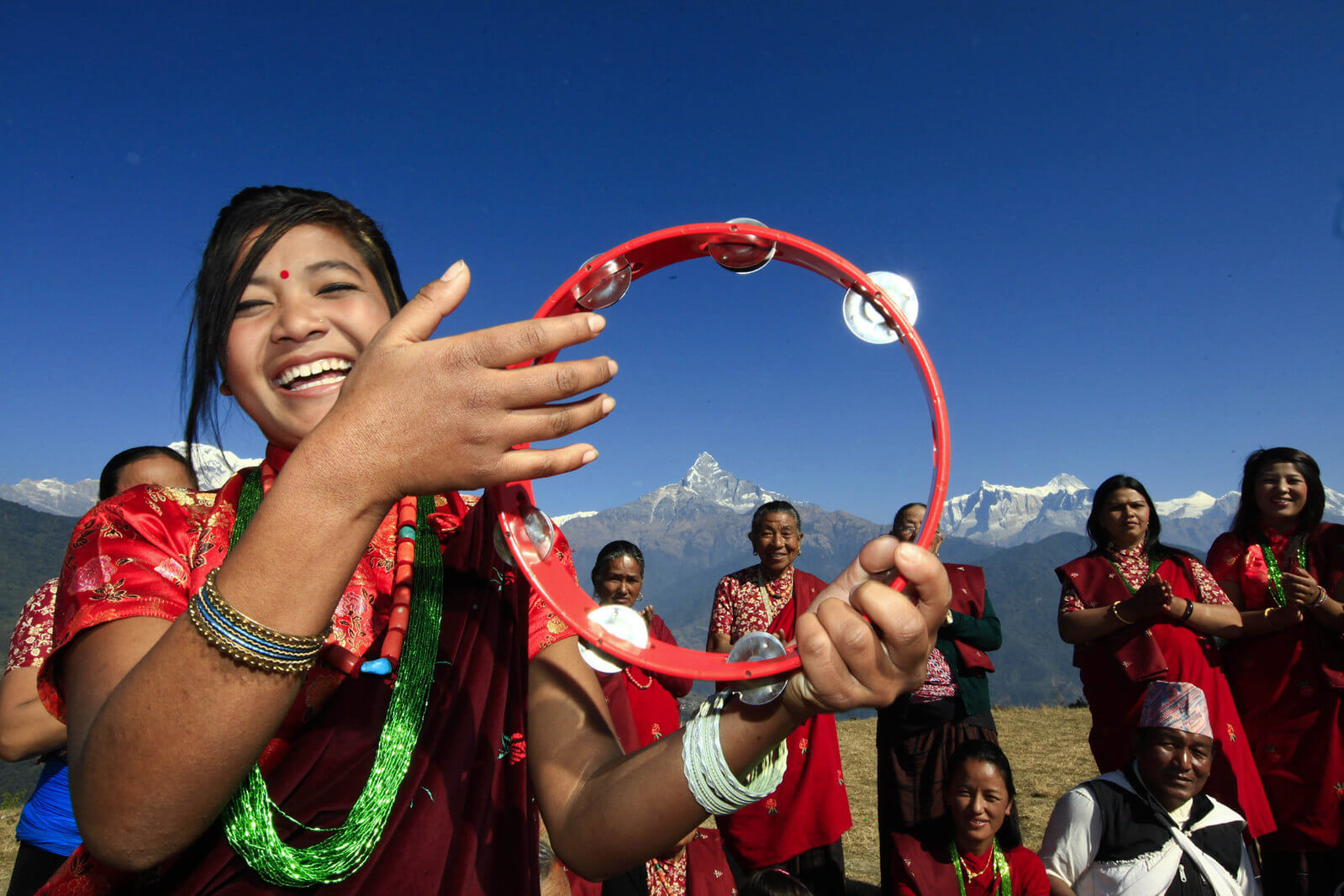 Sonam Lhosar is the Tibetan New Year celebrated by the Sherpa and Tamang people. This festival usually falls in January.

On this auspicious occasion, people perform various rituals and dances in monasteries and villages. People believe these events help remove evil forces from their communities and societies. 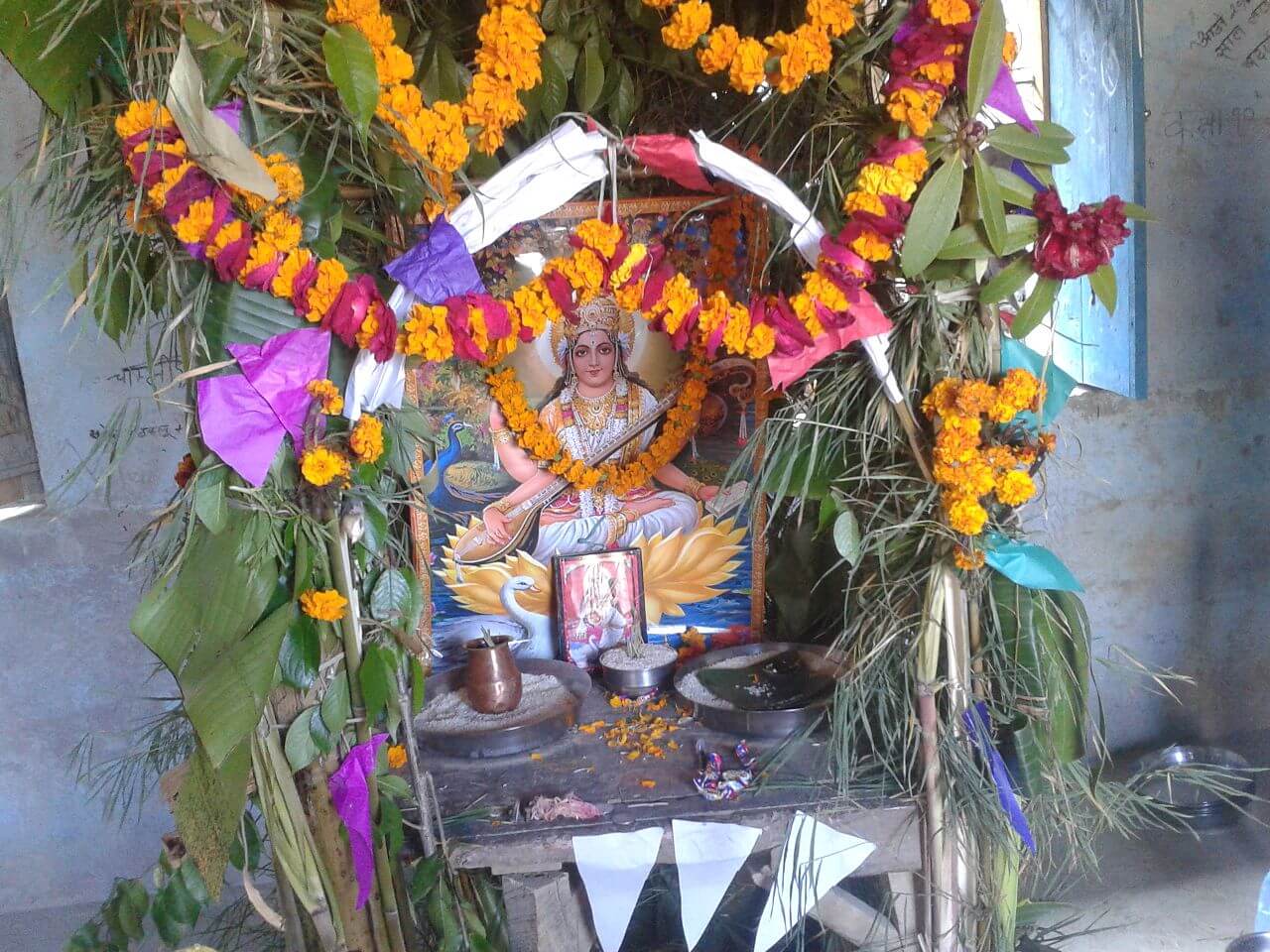 Saraswati Puja is a celebration of the birthday of the Goddess of Learning, Saraswati. The festival also falls in around January and February.

On this day of celebration, many children visit Saraswati temples and write their first letters and names. There is a belief that by doing this, Saraswati blesses them with knowledge and learning power.

While trekking in Nepal in January, you might get a chance to partake in these festivals and explore Nepali cultures and lifestyles.

Best Routes for Trekking in Nepal in January 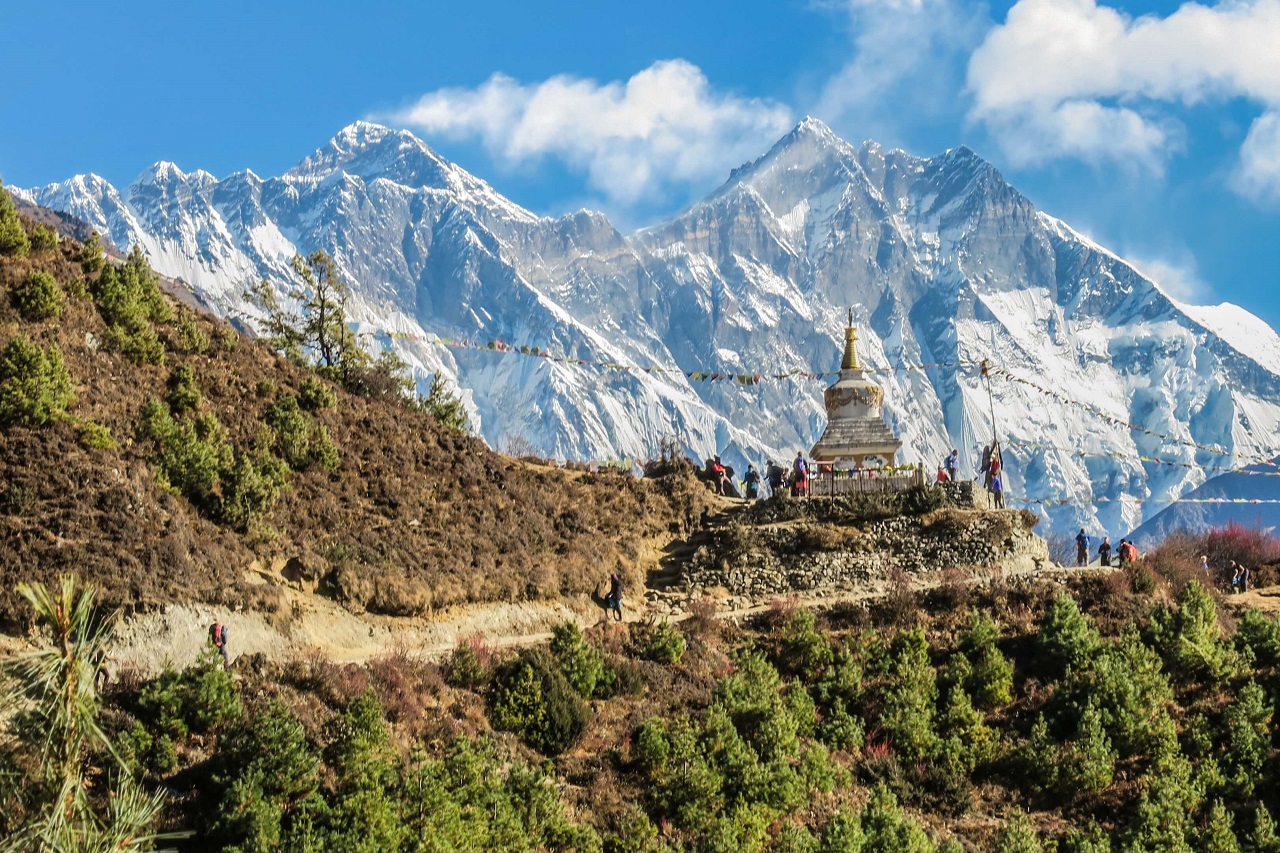 The Everest Panorama Trek is a short and comparatively easy trek to Everest Region. This trek takes you to a maximum elevation of 3,870 meters at Tengboche. The clear skies of January favor this viewpoint to give you beautiful views of Mt Everest.

En route to Tengboche, you pass through Namche Bazaar. Namche is the largest settlement of Sherpa. It is also the most popular stop in the Everest Trek. Here you can buy almost everything that you might need for your trek.

If you’re super lucky, you may even encounter Snow Leopards this month.

Here’s a table with Temperature and Rainfall details for locations en-route the Everest Panorama Trek during January. 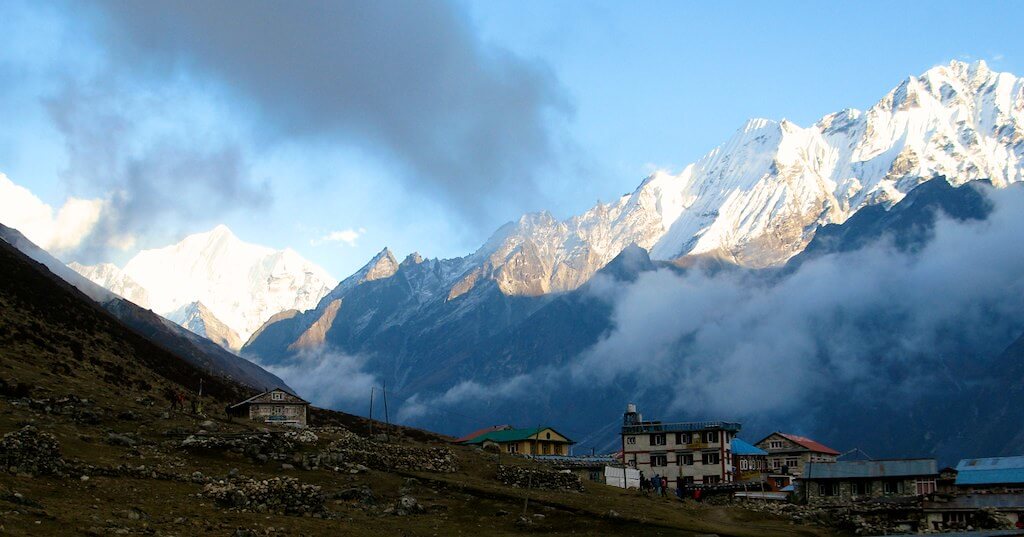 The Langtang Valley Trek is another adventurous trek that is doable in the winter month of January.

This short trek takes you to Tsergo Ri, at a maximum elevation of 5,150 meters. From this viewpoint, you get breathtaking views of Langtang Lirung, Langtang Ri, and Dorje Lakpa.

Unexpected weather changes and heavy snowfalls in January may cover up the routes to Tsergo Ri. This might render this point a tough climb, but with a professional guide, proper preparation, and patience, you can achieve this endeavor.

En route to this viewpoint, you come across Kyanjin Gompa, an ancient Monastery at Kyanjin Village. While staying here, you can experience and explore the Buddhist cultures of Tamang and Sherpa people.

During your Langtang Valley Trek in January, you might even get opportunities to spot rare species of flora and fauna in the rich Langtang National Park. Lucky trekkers get rare chances of spotting Snow Leopard in the region.

Here’s a table with Temperature and Rainfall details for locations en-route the Langtang Valley Trek in January.

Highlights of the Trek 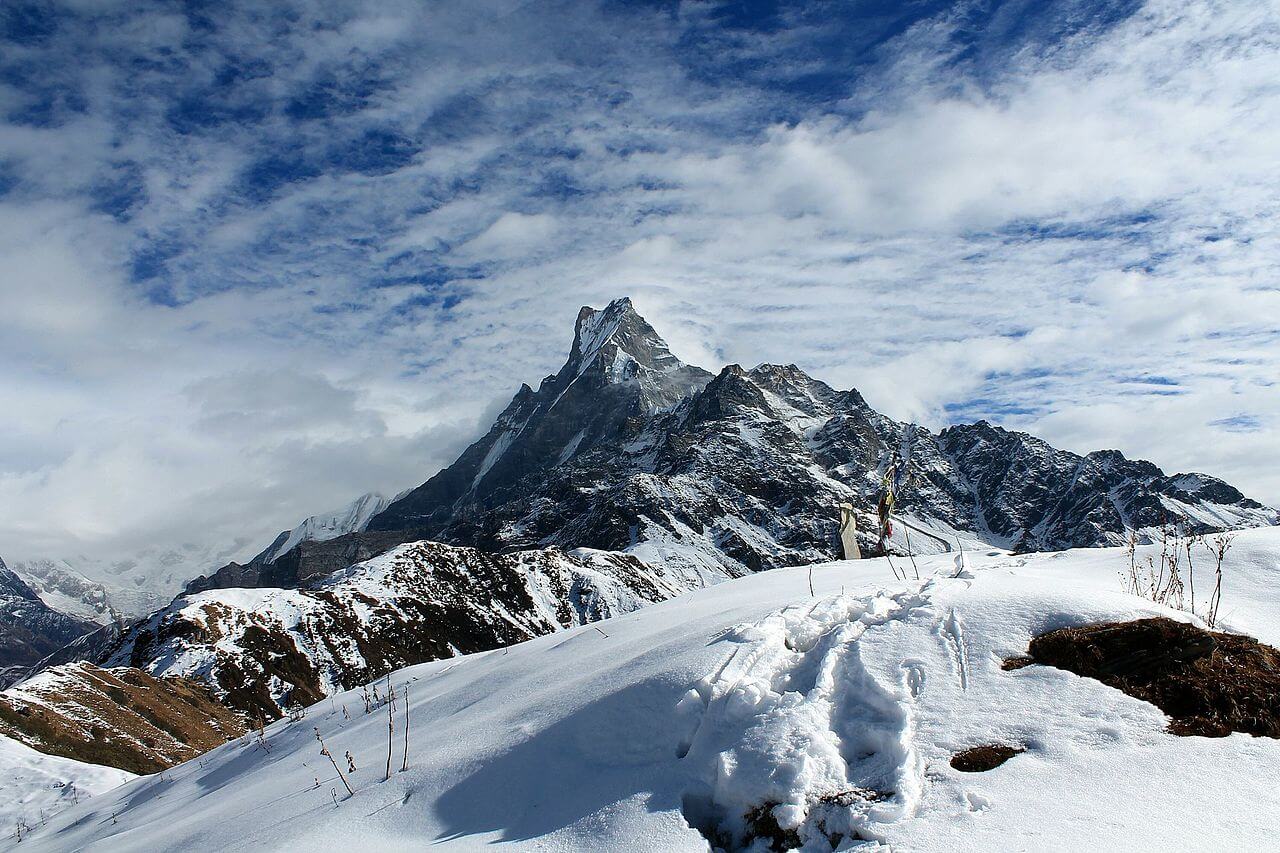 The Mardi Himal Trek is a short and easy trek to the High Camp of Mardi Himal. This adventure around the Annapurna Massif is not so difficult and thus is doable in January as well.

The winter snow sparkling in Annapurna, Dhaulagiri, Machhapuchhre, Manaslu, and Mardi Himal takes breaths away. The January skies are often clear and will have no chance of rain. The visibility offers beautiful landscapes all around you during the trek.

This is a new trail opened recently. So this trek remains quiet and peaceful with fewer crowds than any other route in the Annapurna region.

Here’s a table with Temperature and Rainfall details for locations en-route the Mardi Himal Trek in January. 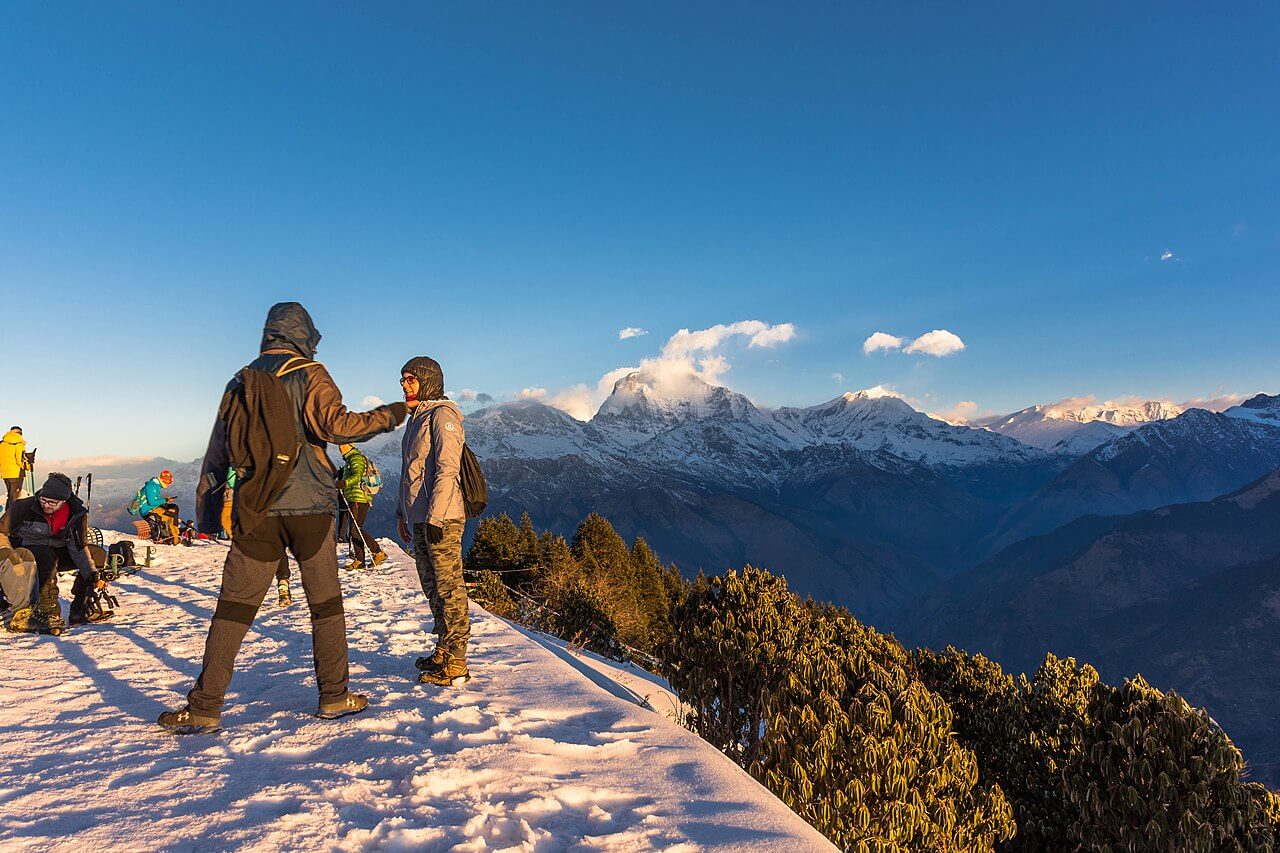 The Ghorepani Poonhill Trek is a moderate level trek quite favorable to do even amid winter. This trek starts from Pokhara where you can spend a night to explore the beautiful lakes and beauty of the city itself.

During this trek in January, the cloudless skies offer you with mesmerizing snow-capped mountain views of the Annapurna Ranges, Dhaulagiri Ranges, Machhapuchhre, Nilgiri, and other high mountains in the route.

Ghorepani is the largest village in the Annapurna Region. During your stay in this village in January, you can explore the unique cultures and lifestyles of the Gurung locals.

From here, you go on a small hike to Poonhill, the main viewpoint of the trek at 3,210 meters. Poonhill is famous for pristine sunrise and sunset views of the Annapurna ranges.

Here’s a table with Temperature and Rainfall details for locations en-route the Ghorepani Poonhill Trek in January. 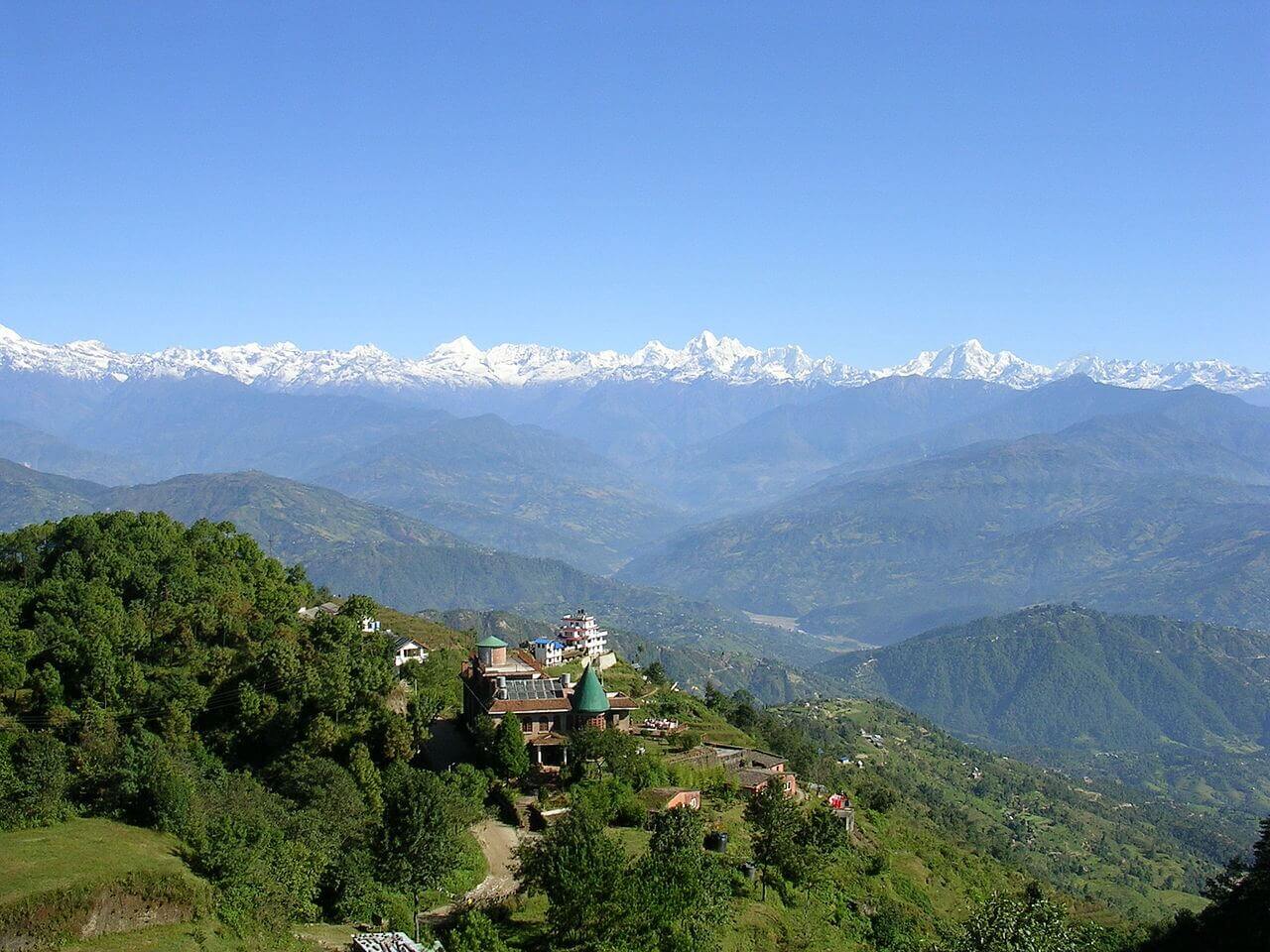 The Sundarijal to Nagarkot Trek is one of the shortest treks in this list.

Beginning from Sundarijal, the primary drinking water source of Kathmandu Valley, this trek takes you through Shivapuri National Park where you can explore diverse flora including oaks, pines, orchids, and mushrooms.

You might also spot rare wildlife like jungle cats, sloth bear, leopard, and wide varieties of birds and butterflies.

This trek takes you through Chisapani to Nagarkot. In the clear winter skies, you can enjoy panoramic views of Langtang and Ganesh Himal Mountain Ranges along with warm hospitality of Gurung villages in Chisapani.

The final spot at Nagarkot is famous for mesmerizing sunrise and sunset views on Annapurna, Manaslu, Langtang, and Ganesh Himal Ranges.

In January, you can also take a few days strolling around exploring Kathmandu Valley and the UNESCO Heritage Sites such as three Durbar Squares, Boudhanath, Swayambhunath, and Pashupati.

Here’s a table with Temperature and Rainfall details for locations en-route the Sundarijal to Nagarkot Trek in January.

Tips For Trekking in Nepal in January 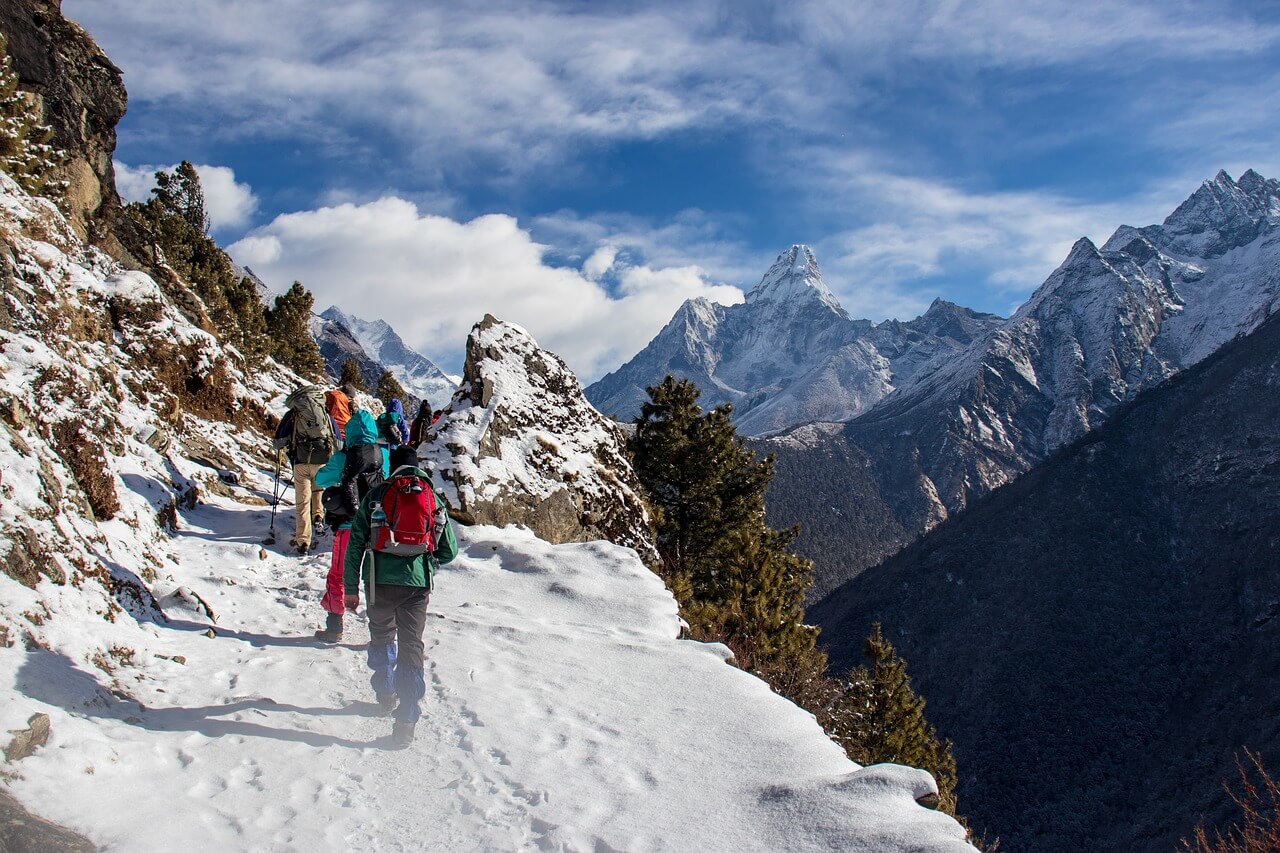 January is the coldest month of the year. The days are warm and sunny while the nights are freezing cold. Without proper preparation, you may suffer a lot of difficulties during your trek in Nepal.

But don’t worry, we’ve got you covered. These few tips mentioned in this list will help minimize your difficulties.

Here are a few tips for Trekking in Nepal in January.

Equip a four-season warm sleeping bag with a liner. The nights in the high altitudes will be freezing cold. Some nights, you may feel severe cold even inside the closed walls of tea houses and hotels.

In these cases, a warm sleeping bag will help you get enough sleep for your next day’s hike.

Drink lots of water and stay hydrated. Even in January, though its cold, you need to drink plenty of water to compensate for water lost from your body while trekking.

Sometimes lack of water in your body may lead to altitude-related sickness as well.

Apply the layering concept while wearing clothes. By wearing many layers of clothing will keep your body drier and warmer than a single bulky jacket.

In the case of decreasing temperatures, you can add a layer or two. If the temperatures rise, you can remove a few layers and keep trekking comfortably.

At high altitudes, the weather can change quite drastically in short periods. Harsh weather conditions might render you to take a different route in which case a guide will have the proper knowledge to direct you to the desired destination.

The clear skies offering panoramic mountain and valley sceneries are the main attractions for trekking in Nepal in January. The temperatures are bound to drop, but with proper preparation, you can enjoy adventurous experiences from the treks mentioned above.

The viewpoints in these treks offer some nights under the artistic starry skies. This opens up opportunities for photographers to capture some of the best shots of the Milky Way Galaxy and other celestial exhibitions in space.

While staying inside warm tea houses and hotels, you can feel the local people, ancient tales and stories of those locations and their significance.

In a nutshell, if cold temperatures don’t bother you, Trekking in Nepal in January will be a pleasant experience that will stay in your heart throughout your lifetime.

Q1. Is it possible to trek in Nepal in January?

Even though January is the coldest month, low altitude treks won’t be that difficult to trek. The days are warm and sunny. The nights may get cold, but the warm tea houses and hotels in the trekking routes will keep you warm at night.

Q2. Are accommodations available while Trekking in Nepal in January?

Yes, in the trekking routes mentioned above like Everest Panorama Trek, Langtang Valley Trek, Ghorepani Poonhill Trek, and others, accommodations will be available throughout the year.

There are comfortable and warm tea houses and hotels along the routes through these treks. Due to the offseason for trekking, these places won’t see much of a crowd, and therefore you might even get discount offers in these tea houses.

Q3. What is the weather like in Nepal in January?

In Nepal, January is the coldest month among all twelve months. There is a meager chance of rainfall throughout the month. The skies remain clear with warm sunlight pouring onto your body in the day.

These temperature ranges may decrease with the increasing altitudes that your treks might take you. The nights are even colder with minimum temperatures decreasing up to -10 degrees Celsius.

In Nepal, this month is offseason for trekking. However, Nepal offers many low altitude trails that you could trek favorably even in this month. 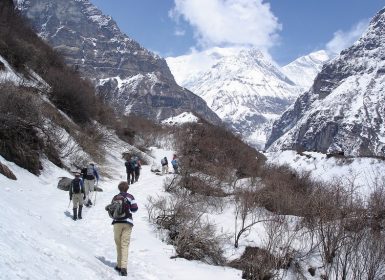 April is the season of blossoming flowers and verdure. With the spring greenery surrounding you and the moderate weather conditions, trekking in Nepal in April will be an adventure of a lifetime. The skies remain clear, offering the best views of the Himalayas and the green valleys. Temperatures average to 19 degrees Celsius in the …