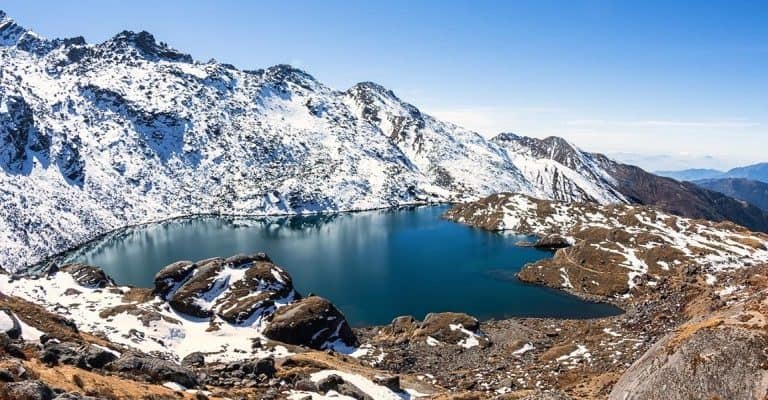 Exploring the northern Himalayan realm to the capital Kathmandu, Langtang Gosainkunda Trek takes you to the beautiful region of Langtang that is sheltered by the great northern mountains of Langtang. Entailing a visit to the pristine glacial lake system in the backdrop of the snow-clad mountains, it is a guarantee that a traveler can experience the radiant natural prosperity of the Langtang region in its full glory. This trek takes you through high passes, ethnic settlements of Sherpas and Tamangs, and the splendid Langtang National Park. The Langtang Gosainkunda Trek is a great way to witness the unique floras and faunas and the treasured wildlife that is preserved inside the park. While you explore the natural splendor of Langtang, you can get a taste of thrill by rafting in the exciting rapids of the Trishuli white waters. The Langtang Gosainkunda Trek is a total package that allows travelers to experience the natural and cultural beauty of the Langtang region.

The Langtang Gosainkunda trek takes you through some of the most impressive places, including exotic landscapes, historical landmarks, and ethnic communities. This article covers the major highlights of this trek which are:

Surrounded by spectacular Langtang Mountains soaring into the sky, this can be a great place to enjoy splendid views. Under the cover of the Langtang National Park, the trails leading to the Langtang Village host the residency of the endangered Red Pandas. Views of Langtang Himalayas along with the Tibetan-inclined culture are the stand-out features of the village. The Langtang village is also well renowned for its cheese factory. The cheese here is made with Yak milk, which is the reason for its delectable taste! In all, the Langtang village opens you up to the ravishing beauty of the Langtang region. 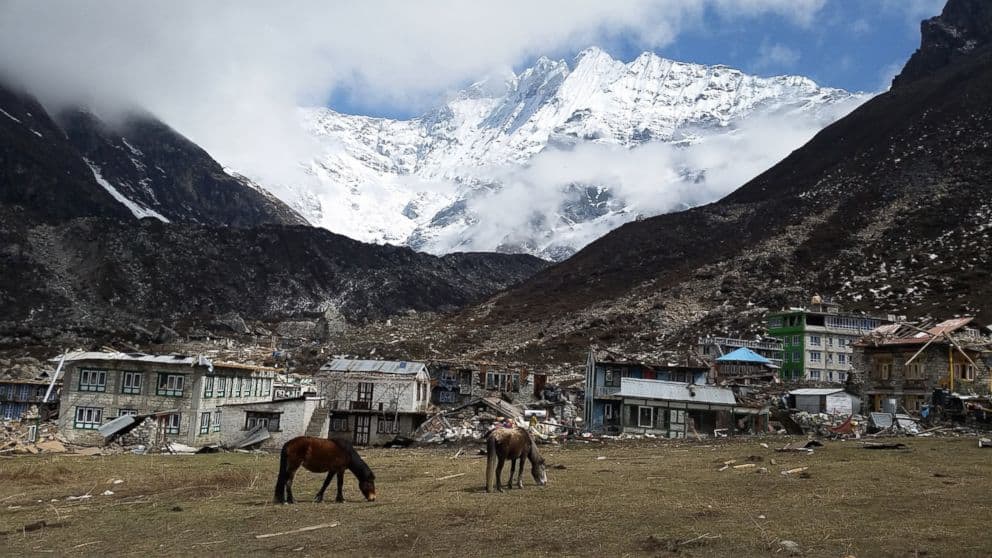 As the trek continues further from the Langtang village, you proceed to Kyanjin Gompa. You get a spectacular view of Kyanjin Gompa and the icefall originating from the Langtang Lirung as you cross Mundu and head towards the magnificent village of Kyanjin. Fluttering prayer flags and an eccentric Buddhist aura welcomes you to the village which is home to the illustrious Kyanjin Gompa. Kyanjin Gompa, on the trek, is where you encounter the cultural face of this region as the Kyanjin valley has developed itself as a religious and spiritual sanctuary. Majority of the people living around here are Tamangs. You will get to learn about their lifestyle and culture which is heavily influenced by Tibetan Buddhism.

While you are at Kyanjin Gompa, it is advised to acclimatize to the increasing altitude. For this purpose, the Trekkers explore the Kyanjin Gompa, Langshisha Kharka, and climb Tserko Ri (4984m). Tserko Ri is also considered as the crown of the Langtang valley, from where you can get a better view of the mountains in the Langtang range. Tserko Ri is a challenging climb that can take up to approximately 5-6 hours to complete; nevertheless, the strenuous climb rewards you with a breath-taking 360-degree view of the Himalayas in the Langtang massif along with the Langtang valley. While the valley lies below, above them, you can witness a parade of marvelous snow-capped mountains, namely: Langtang Lirung (7227m), Langtang II (6596m), Ganesh Himal (7422m), etc. You will be returning back to Kyanjin Gompa for the night after enjoying the views atop the Tserko Ri. 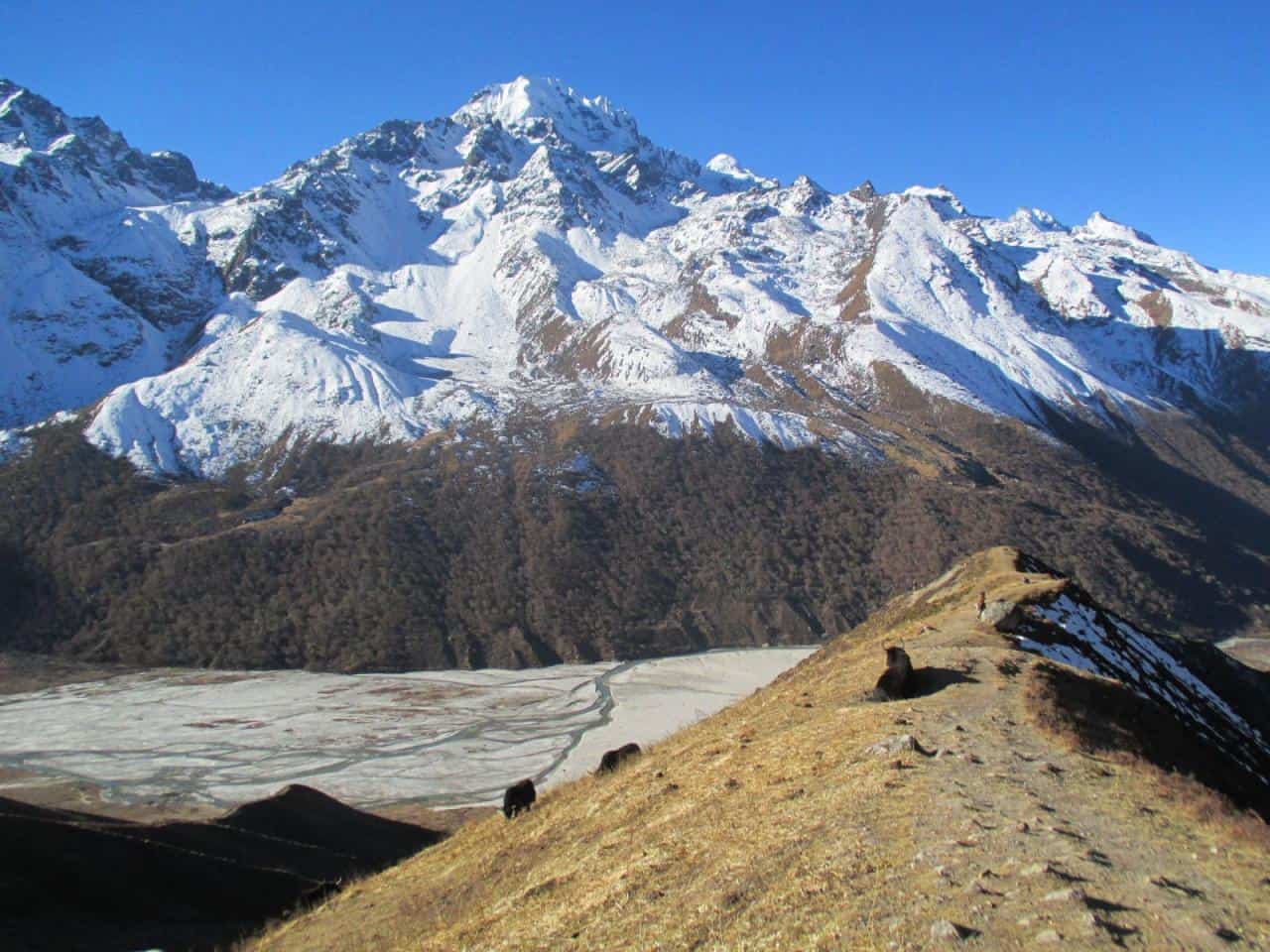 Located at an altitude of 4,360 meters, Gosainkunda is one of the most precious pilgrimage sites of Nepal. Surrounded by exotic mountains, the sight of this tranquil lake is absolutely dazzling. The Gosainkunda Lake holds significant religious values as it is believed to have been created by Lord Shiva. To quench his thirst after swallowing a poison that threatened to destroy the world, Lord Shiva pierced a glacier with his trident to obtain water from it. During the month of August, a large number of devotees visit this lake to take a bath in this lake. It is believed that doing so washes away one’s sins and impurities! There are around a dozen other lakes around Gosainkunda including Bhairavkunda, Saraswatikunda, and Surya Kunda. 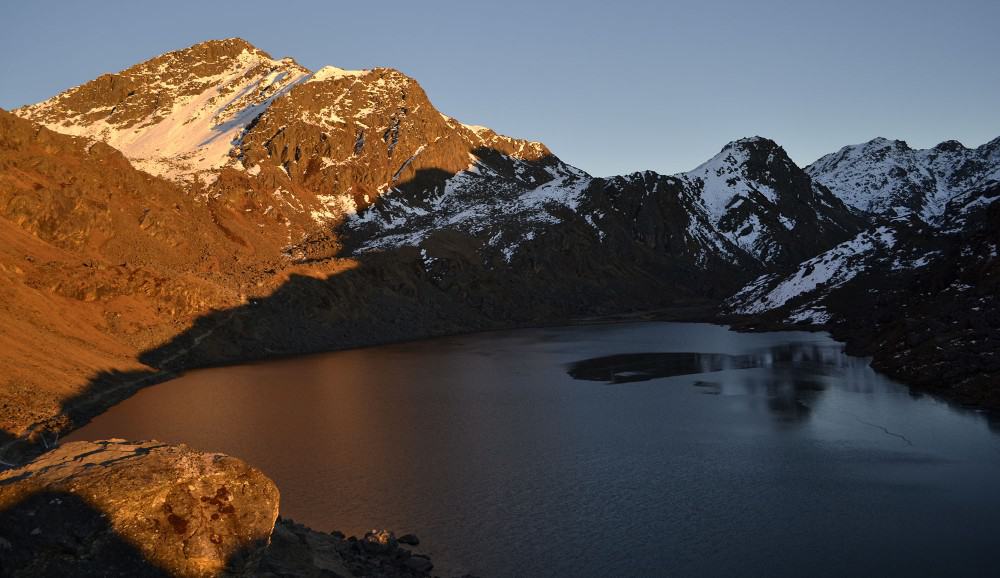 Moving further from Gosainkunda, your next destination will be Ghopte. En-route you will reach the highest point of this trek which is the Laurebina pass (4,610). The pass also offers spectacular views of Mt. Manaslu (8163m), Ganesh Himal (7422m), Langtang Lirung (7227m), and others in the Langtang mountain range as well. Adorned by the Buddhist prayer flags, Laurebina is a great place to enjoy a panoramic view of the Himalayan ranges from Everest to the east and Annapurna to the west.

With its combined beauty of nature and culture in its rugged land, Langtang Gosainkunda is a sublime trekking option. To get the most out of this trek, it is crucial to choose the timing correctly. The best times to take on this trek is considered to be during the months of March to May and September to December. As the trails are dry and the weather is clear, there are minimal disturbances between you and the glorious experience of the Himalayas. With a competent team like ours, at Nepal Social Treks, you can be certain of a complete Himalayan company. 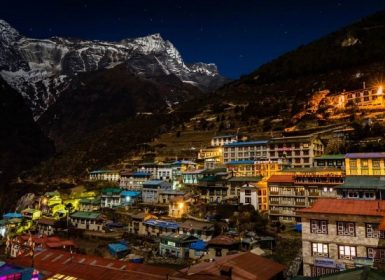 It is often said that mountains are the beginning and the end of all of nature’s sorcery. Anyone who has experienced the majesty of a snowcapped peak will not only agree to this statement but add the fact it’s an altogether a different kind of magic that surrounds the world’s tallest mountain, the Mount Everest—a … 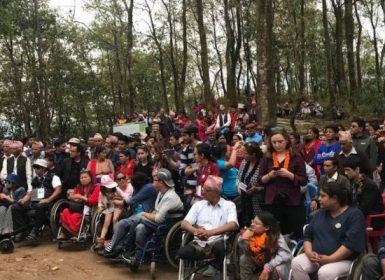 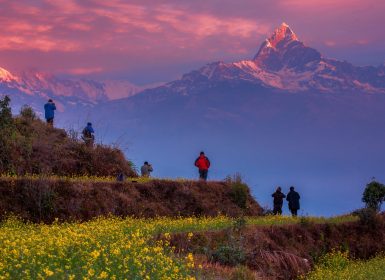 Hikes and treks are probably the best ways to explore new places, people, cultures, landscapes and even yourself. But some of you may have to catch a flight back to your country within a day or two.  And since you have very little time left in Nepal, you can’t opt for full-fledged trekking packages that …