5 Most Popular Peak Climbing In Nepal 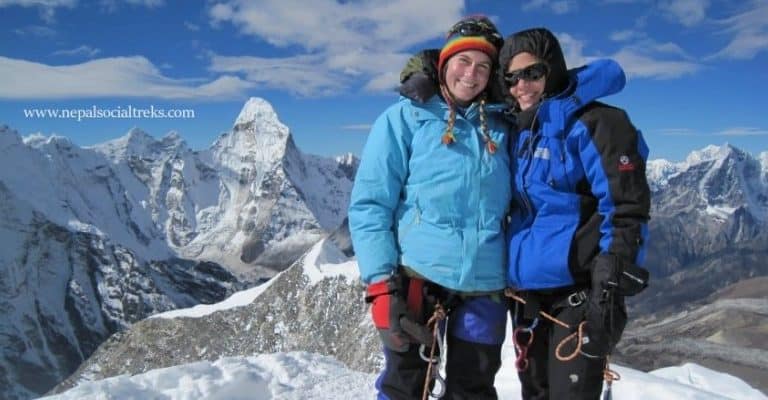 The Himalayas have always been alluring the thoughts of individuals yearning rapturous adventures andthrills. The rugged topography of the Himalayan region is where adventure seekers find their ultimate thirst-quenching experience. Out of seemingly innumerable peaks, the Government of Nepal has permitted 414 peaks for climbing. The difficulty of climbing in these peaks varies in a wide range, which is one of the major reasons it attracts adventurers. If you are a hard-core adventure seeker or you just want to try some basic peak climbing; Nepal is the perfect place to find what you are looking for! Some of the most popular peaks to climb are Island Peak (6,189m) located in the Everest Region, Mera Peak (6,461m) located at the border of Khumbu Region, Lobuche Peak (6,119m) located in Khumbu Region, and Yala Peak (5,500m) located in Langtang. Here are brief descriptions of some of the most popular peaks to climb in Nepal:

Standing at 6,461 meters height, Mera Peak is Nepal’s highest trekking peak. It is located towards the
border of the Khumbu Region. The difficulty of this climb is moderate, thus it is an excellent option for
any average trekker. Mera Peak is one of the most popular peaks to climb in Nepal. Upon summiting the
Mera Peak, you will get remarkable views of notable eight-thousanders such as Mt. Everest (8,848m),
Cho-Oyu (8,188m), Lhotse (8,414m), Makalu (8,463), and Kanchenjunga (8,586m) and countless others
in the Everest range. During the 17 days of the trek, you will encounter the beautiful wilderness of Nepal
and witness the lifestyle of the Sherpa communities of the esteemed Everest region. Mera peak climbing
journey costs $1990 and is best done during autumn of spring as the sky is clear and the view is
undisrupted. These seasons contain the months of April to May and October to December. Standing at 6,189 meters height, Island Peak is a peak which towers away from the thickly rising
mountains in the Everest region and hence it got its name. Also known as Imja Tse, it is situated at the
top of the Chhukung Glacier in the Everest Region. As it follows the same route as the famous Everest
Base Camp trek up until Lobuche, you follow the entire Everest Base Camp trek to reach the foot of the
world’s tallest mountain, Mt. Everest (8848m). Yet another moderately difficult trek, it is welcoming to
beginners who are just starting to enter the world of mountaineering. Island Peak Climbing is a
remarkable journey that takes you through the Khumbu Valley through quaint Sherpa villages showcasing
their enriching culture. Upon summiting Island Peak, you will get an amazing view of Nuptse (7,861m),
Lhotse (8,414m), Lhotse Shar (8,393m), Makalu (8,463m), Baruntse (7,129m), and Amadablam (6,856m)
among the majestic parade of numerous other peaks. Island peak climbing can take up to 19 days to
complete and costs $1950. The ideal months for the Island Peak climbing are from April to May and
October to December. tanding at 6,429 meters height, the Chulu East Peak lies in the Annapurna Himalayan Range located in
the Manang Valley. The Chulu East Peak is a popular trekking peak in Annapurna Region as it also
consists of the Manang Valley trek. Chulu East Climbing will take you through the lush green forests,
gorgeous valley of Manang where you will meet the local Manangi people. The religious revelation of
monasteries and unique culture also make the journey captivating, to say the least. You will get views of
notable mountains from the Chulu East peak summit such as Mt. Dhaulagiri (8167m), Mt. Manaslu
(8163m), Mt. Annapurna (8091m). This climb requires you to be physically fit and have moderate
experience in climbing. The Chulu East Peak climb costs $2550 and can take up to 19 days to complete.
Also, April to May and October to December during autumn and winter seasons respectively are
considered as the best times for undertaking the journey. The Lobuche Peak Climbing has two peaks you can summit: the east 6,119 meters and the west 6,145
meters. The Lobuche peak is located near to the Khumbu Glacier which again means it takes you through
parts of the Everest Base Camp Trek. You explore the exquisite floras and faunas along the way along
with the culturally rich Sherpa villages and monasteries on the way. The journey also entails conquering
Kongma La Pass (5535m), one of the highest passes in the entire country. You get a magnificent
panoramic view of beautiful mountains from the Lobuche peaks entailing Mt. Everest (8,848m), Lhotse
(8,414m), Nuptse (7,861m), Ama Dablam (6,856m), Cholatse (6,440m), and Pumori (7,165m) to name a
few. This climb can take an average of 15 days to complete. It is a step higher in difficulty than Island
Peak climbing and requires moderate peak climbing experience. Costing $2215 per person, the months of
April to May and October to December are the best for the climb.

If you are an avid climber, Everest Climbing Expedition is definitely on your bucket list. Since its first
summit in 1953 by Tenzing Norgay Sherpa and Sir Edmund Hillary, the number of people engaging in this
expedition has significantly increased. It is indeed one of the hardest expeditions due to harsh
unpredictable weather conditions and ming-boggling altitude. The all-conquering feeling is bound to
overwhelm any soul after reaching the top of the Mt. Everest (8,848m) however, the view is even more
striking with mountains including Lhotse (8,414m), Nuptse (7,861m), Makalu (8,463), Cho Oyu (8,188m),
Ama Dablam (6,856m), and countless others, wherever you set your gaze. As this expedition can take up
to 65 days, it requires massive physical exertion and mental endurance in the journey. The best time to
do this expedition is the spring seasons during the months of March to May or October and November
during the autumn season. This expedition costs an average of $38,300. If you are seeking to do peak climbing, Nepal remains the undisputed destination to do so. You can
choose from a variety of perks depending on the level of difficulty you are ready to face. Each upheaval
and strain brings forth delight and bliss in unsurmountable amounts. Rejoice the sheer natural creation
and divine grace of the Himalayas as you make way through villages with the warm-hearted populace
and astonishing bio-diversity to conquer the peak of your liking. The Himalayan ventures call for your
involvement. 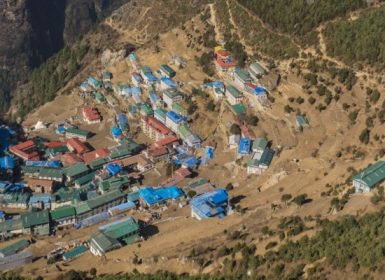 You sweat, you barely catch your breath, you are dragging your feet uphill for hours and then you arrive: an open valley, colorful houses, nestled between the mountains, smiling locals greeting you and inviting you in their tea houses. In an instant you forget the struggle: it is all worth it. In the Nepal’s Himalayas … 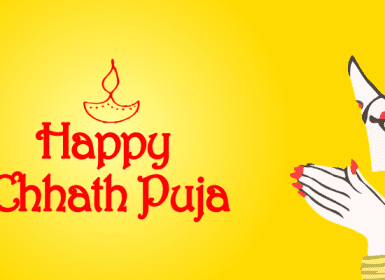 Not just the land of Himalayas, not just limited to flora and fauna but also a melting pot of people belonging to a variety of culture, religion, language, and ethnicity. The three main geological belts that are encompassed in its borders; namely Mountainous, Hilly, and Terai, are filled with people from different ethnic groups who … 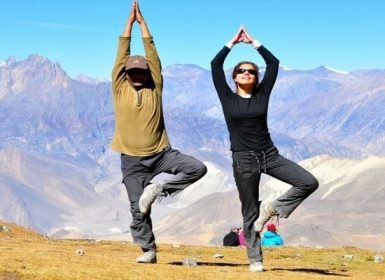 In this fast-paced world, we often forget ourselves and our purpose. Yoga is sought after more than ever, simply as an art to be aware and awake. “So, where can you get started?” Some questions can’t be answered by Google. That’s where meditation comes in. Practiced since antiquity in religious traditions, meditation is a part …